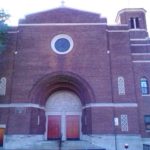 The Church of St. Helena is a Roman Catholic parish church under the authority of the Archdiocese of New York. It was established in 1940, and the church building was built in 1941 and dedicated on May 3, 1942. It was designed by the prominent architectural firm of Eggers & Higgins just after they designed the Jefferson Memorial in Washington, D.C. The new parish’s first Mass took place on June 9, 1940. Mass was celebrated by the newly appointed pastor Msgr. Arthur J. Scanlan, S.T.D. in a former tavern, which is still located on the grounds and was known as the Loeffler building, and about 1,000 parishioners attended it.  It is said that Msgr. Scanlan had arranged the taproom mirrors so people could see the altar no matter where they sat.  Msgr. Scanlan had been appointed the president of St. Joseph’s Seminary in 1930, having previously served 20 years on the Seminary faculty.

Of early Italian Renaissance influence, the new parish plant was constructed of select brick with limestone trim.  The church and school face east with a frontage of 146 feet, while the north side of the church and convent occupy 170 feet. The nave of the church was designed to seat 900 and the balcony to accommodate 177 additional.  The school was built to provide classroom facilities for 600 pupils, though at its peak there were over 2,000 students in two shifts attending classes.  The convent, which is now occupied by some of our Piarist juniors, was built to provide living quarters for 23 sisters.  On October 4, 1941, Msgr. Scanlan celebrated the first Mass at St. Helena’s in the auditorium of the Church, but it was on Christmas morning in 1941 that Mass was celebrated for the first time at the main altar of the new Church of St. Helena. At its zenith, there were over 100 priests and nuns teaching in the school. Many alumni remember how they would always bring a lemon on the last day of class to shine the top of their desks for the next school year. The parish purchased some land in 1949 that was owned by St. Joseph’s School for the Deaf and opened two high schools, St. Helena’s Girls’ High School and St. Helena’s Boys’ High School, both of which later merged to become the co-ed Msgr. Scanlan High School. The school soon became the largest parish high school in New York City.

Until 2014, the parish had only four pastors.  In that year, Msgr. Scanlan High School became an independent, private Catholic High School, while St. Helena School remained one of only 29 parish-based elementary schools left in the Archdiocese; the others all became regional elementary schools. The Piarist Fathers began ministering at the parish in 2014, and four Piarist priests moved into the rectory.  Fr. Emilio Sotomayor, Sch.P. became the fifth pastor in September 2014. Fr. Emilio was from Spain. He renovated the church’s sound system and replaced the worn church kneelers.  He left St. Helena in July 2015 to become the headmaster of a Piarist School in Ponce, Puerto Rico. The other three Piarist priests assisting him, Rev. Hector Cruz, Sch.P., who is from Puerto Rico; Rev. Andrew Berinyuy, Sch.P., who is from the Cameroon; and Rev. Szymon Kurpios, Sch.P., who is from Poland, also left.

The parish is located in Parkchester, which is is a planned community originally developed in 1939 by the Metropolitan Life Insurance Company and located in the central Bronx region of New York City. The population of Parkchester is 30,000 people living on 210 acres.  The racial makeup of the neighborhood is 43% African American, 38% Hispanic, 14%  Asian (mainly from Bangladesh), 3% Non-Hispanic White, and 2% from two or more races. The parish currently has 1,500 registered families with a makeup of 60% Hispanic, 30% Black, and 10% Non-Hispanic White and Asian. The parish has eight weekend Masses in three languages (English, Spanish, and French). The parish has a large aging population as well as a large undocumented population, and the parish is constantly seeking to identify existing city programs and inviting representatives from those programs to assist our parishioners.  One of the biggest challenges facing the parish is a continuing dramatic decrease in the Catholic population living in Parkchester. Also, a recent nation-wide study reveals a dramatic decrease in the percentage of Catholic students who actually attend Catholic Schools, as well as a decrease in Mass attendance of teenage and young adult Catholics. The parish is placing emphasis on establishing programs that reach out to those two populations.  There is also a large population of adults who are missing sacraments, and the parish is trying to identify those who are missing sacraments and provide programs that will assist them in obtaining them.

News from the parish

Fr. David Powers, Sch.P. (2015- present) became the church’s sixth pastor on August 1, 2015, the year the parish celebrated its 75th anniversary. He was joined by Rev. Richard Wyzykiewicz, Sch.P. from Philadelphia, and Rev. Nelson Henao, Sch.P. from Colombia, South America. There are now five Piarist priests and four juniors in residence at the parish. The elementary school began a city-sponsored Universal Pre-kindergarten program in 2015 and opened a city-sponsored ASPIRA after-school program in 2016.  The very first diaconate ordination in parish history took place in June 2017 when Rev. Br. Vinod Angadathu George, Sch.P. was ordained as a transitional deacon by the Most Rev. Felix Lazaro, Sch.P., the bishop emeritus of Ponce, Puerto Rico.  By the end of 2019, the parish’s very first priestly ordination is scheduled to take place with the ordination of two Piarist priests.

The parish has over 20 different ministries, with some of the biggest being our Religious Education and RCIA programs, the Calasanz Movement, two Charismatic Prayer Groups, a Bible Study group, the Divine Mercy Service Group, the Mother Teresa Outreach Group, the Guadlupinos Devotional Group, the Legion of Mary, and the Boy Scouts.

The mission of the Parish of St. Helena is to be a community of faith that invites, inspires, educates, and leads people to know and love Jesus Christ, to understand and live their Catholic faith, to proclaim the Good News of the Gospel through love and service to one another, and to celebrate the presence of our Lord Jesus Christ, while being faithful to the tradition of the Catholic Church, our history, and the Community it serves. 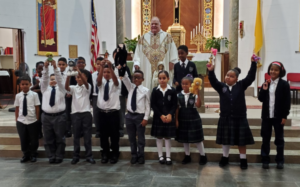 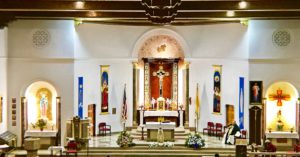 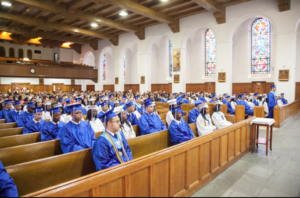 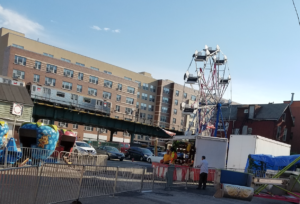 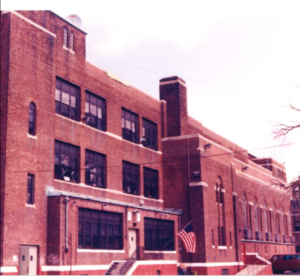